American army objectors to the Iraq War:
UK military objectors to the Iraq War:
Anyone who stands up to the might of the army and the government to say that they will not fight in an unjust and illegal war has my deepest respect. Some of these people joined the army because they thought it would be a good career, until they realised it involved killing civilians and blowing up their homes and destroying their culture.

The difficulty for a lot of these guys is that they don't actually object to war, just to the Iraq war, which makes it hard to register as a conscientious objector; though they should be allowed to present a defence under the Nuremberg Principles, the principle that soldiers should refuse to obey an illegal order.
Posted by Yewtree at 11:54 am No comments:

I have just been sent the following item from Multicultural Matters newsletter, Feb 07.

European Hindus urge EU not to ban swastika
The Hindu Forum of Britain has joined with its counterparts throughout Europe in asking European governments not to heed Germany's plans to use its presidency of the EU to launch an initiative which could ban any display of Nazi symbols. The symbols are already banned in Germany and following the rise of the far right the government there would like to see the swastika banned by all member states.

The issue last came under the spot light two years ago in February 2005 when the HFB, an umbrella organisation of 250 groups of Hindus up and down Britain said that it would fight any European ban on the swastika, which was being called for after Prince Harry's party costume. At the time Secretary General Ramesh Kallidai said: "No one in the West now associates the symbol with Hindu ideology and as a positive symbol of the cosmos."

Although Mr Kallidai acknowledges that German plans are well meaning he said: "The swastika has been around for 5,000 years as a symbol of peace. This is exactly the opposite of how it was used by Hitler. It is almost like saying that the Ku Klux Klan used burning crosses to terrorise black men, so therefore let us ban the cross. How does that sound to you? Every time we see a swastika symbol in a Jewish cemetery, that of course must be condemned. But when the symbol is used in a Hindu wedding, people should learn to respect that. In Sanskrit it means May Goodness Prevail. Just because Hitler misused the symbol, abused it and used it to propagate a reign of terror and racism and discrimination, it does not mean that its peaceful use should be banned."

Well, the ways of displaying it are different - the Hindu way is in a square shape, usually with the arms going clockwise (in the direction of the sun) whereas the Nazi form of the symbol was usually at an angle, and was known as the Hakenkreuz, not the swastika, which is derived from the Sanskrit word for well-being, Svasti, according to the Wikipedia article.

A friend brought back a good-luck banner from India with golden swastikas on it (obviously there as a good-luck symbol) and Rudyard Kipling used to put them on his books, alluding to the Indian meaning. Indeed, 2nd century Jewish synagogues had them in their décor. I think it is difficult for the West to reclaim the original meaning of the symbol, which was representing the movement of the sun through the heavens, but as Hindus have been using it for centuries as a good luck symbol, I don't see why they should be prevented from doing so.
Posted by Yewtree at 10:39 am No comments:

We stayed at Llanthony Priory Hotel at the weekend, in the top room of the tower. I have wanted to stay there ever since visiting the place as a kid, and it lived up to expectations. The room was at the top of a flight of spiral stairs, and had a fourposter bed (which must have been taken up there in bits and reassembled at the top). You had to lie on the floor to look out of the window, but it looked out over the ruins of the priory. I read Hilary Llewellyn-Williams' poem about it as we lay looking out over it. The priory is situated in the Honddu valley, which can be reached by turning off the A465 at Llanfihangel Crucornau. The road twists and turns along the valley, with the hills lifting ever higher either side, until eventually you reach the priory. I had booked the weekend as a Valentine surprise for my husband, so he didn't know where he was going until he saw the sign for the priory (I may have mentioned it once or twice...)

On the Friday it was slattering it down with rain, so after walking round the priory in the rain, we drove into Hay-on-Wye (rather an exciting drive over Gospel Pass in the fog and the rain) and found the very splendid Nepal Bazaar, where we spent lots of money on new clothes, which are fair-trade and very attractive. Then we went to Marijana Dworski bookshop, which specialises in language, travel, and folklore, and I bought a book of Jewish folktales and a dictionary of slang (this appears to be the new definitive slang dictionary). On Friday evening we got chatting to a charming couple over dinner; the conversation (which continued on Saturday evening) ranged over everything from boar spears to science fiction. The food in the Llanthony Priory Hotel is excellent.

On the Saturday we explored Golden Valley; we went to Longtown Castle, Vowchurch, Peterchurch and Dorstone, and the remains of the Arthur's Stone long-barrow. Lewis Carroll's brother (Skeffington Hume Dodgson) used to be vicar of Vowchurch, and there was quite a good exhibition about it in the church. Then we went into Hay-on-Wye again, as it was cold and the cloud still hadn't lifted off the hills, and visited more bookshops. Nick got a book on performance theory, and I got the collected poems of CS Lewis, Labyrinths by Jorge Luis Borges, and Sun Circle by Neil M Gunn.

On the Sunday, the cloud finally lifted, and we drove up to Gospel Pass and climbed up to the top of Twmpa (also known as Lord Hereford's Knob). The view from the top was fantastic; even though Hay Bluff was only intermittently visible between veils of scudding cloud. After that we had lunch and then went to Llangorse to see the remains of the crannog in the lake there. On the way down, we saw a greater-spotted woodpecker. The weather was closing in by this time, so we headed home again.
Posted by Yewtree at 11:44 am 1 comment:

A merry Lupercalia to all!

shadow of the wolf
falls across the turning year;
Romans run amok

no hearts and flowers
only howling at the moon
and waiting for spring.
Posted by Yewtree at 12:40 pm 2 comments:

The number one best place to hide money (apart from in the bank):

I used to put my money in plain sight... inside my Tarantula’s cage. She was the size of the average man’s hand and had half-inch long, curved fangs. I would pick her up and put her on top of the money. Tarantulas don’t move unless they need to so she often was in the same place I put her when I got home. -- Dan

still looks gay to me...

Over at Cynical-C and In Pursuit of Mysteries, a rather sad tale of a bisexual man being forced to pretend to be heterosexual if he wants to keep his life the way it is. Apparently he has now "realised that he is completely heterosexual", despite having had a gay experience, - erm sorry but in my book, that makes you a bisexual. Personally if I was a gay evangelical Christian I'd ditch my sad narrow existence, come out, and move to San Francisco, but...

As Al remarks, perhaps in a different world he could explore his sexuality without fear of censure.

As Cartman remarked when looking at Sparky the Gay Dog, "Still looks gay to me..."
Posted by Yewtree at 9:49 am 4 comments:

Yesterday we took the day off and went down to Stogursey to visit some friends who are staying in the castle there (it's a Landmark Trust property). The castle has two resident geese, which our friends had named Hengist and Horsa. Whilst in Stogursey, we visited the church, where there is a 16th-century carving of a spoonbill on one of the pew-ends, and a fossilised ichthyosaur set into the floor. We also went walking in the Quantock hills, where we saw a raven and a buzzard. Whilst walking round Stogursey village, we saw a cat sitting in the former animal pound, and an escaped pet meerkat (its owner was trying to lure it back into its box). I also saw a small brass rhino in someone's window. Quite a menagerie.
Posted by Yewtree at 11:03 am 2 comments: 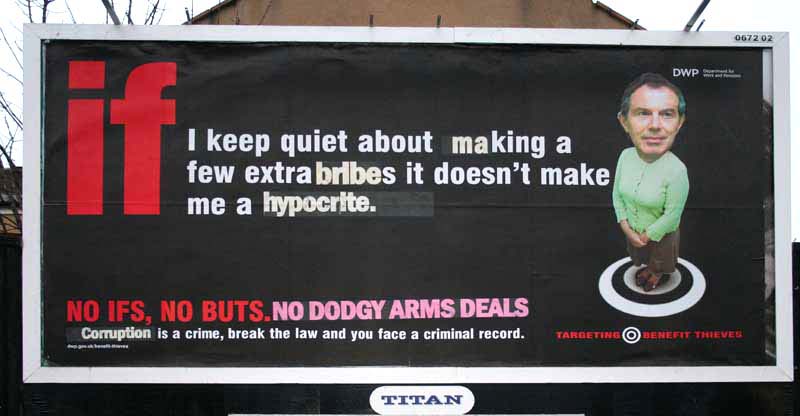 Brilliant subvert from Indymedia of the annoying benefit fraud ad campaign, spotted by the Silver Eel. I've been saying for a while that I'd rather supplement someone's incredibly low pay than subsidise Bliar's dodgy war.
Posted by Yewtree at 5:05 pm No comments:

candle flames flicker,
a silver circlet of stars -
the rustle of silk

not yet the coupling
beneath the stars, there's still time
for maiden blushes.

everything waits
for the turning of the world
spinning into sunlight.

the sword is ensheathed
the fire is smoored, slumbering -
healer moves softly.

white, blush-red, pale gold,
all the colours of Brighid
waiting for the spring.

milky veils of steam,
the ewes' breath on frosty air -
the glint of gold eyes.

the ice melts, dripping
like notes on the harpsichord,
falls into silence.

the sun leans earthwards,
a blush creeps across soft flesh -
a flower opens.

do you remember
the first time? the ecstasy
of buds opening?


A contribution to the second annual Brighid poetry reading in cyberspace.
Posted by Yewtree at 3:39 pm 3 comments:

I am Dark Phoenix
Which Supervillain are you?

Via Hal Duncan, aka Magneto
Posted by Yewtree at 4:22 pm 2 comments:

Yewtree
I love cats, people, the Earth, the Moon and stars, and the simple pleasure of being alive. Everywhere is sacred, everything is part of the dance.